A car that carries the history of Alfa Romeo 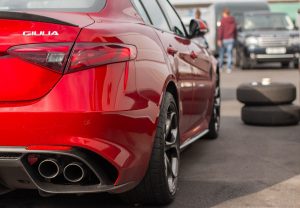 Alfa Romeo makes a serious announcement to the German industry leaders with the Giulia. No matter if Mercedes AMG, BMW M or Audi RS have to wrap themselves up warmly! The Giulia is the first rear-wheel drive car from Alfa Romeo for 30 years. In addition, an attractive Design and a high finish. Immediately getting in the car You will recognize no matter where you look that there is carbon fiber everywhere. Both on the steering wheel and in the dashboards as well as in the center console, everywhere is carbon fiber. The optional sports bucket seats for example are completely made of carbon. The Quadrifoglio Verde version is characterized by the four-leaf shamrock on a white background. The sign originated in racing in the 1920s, where one driver of Alfas Racing Team glued a four-leaf clover on a white rhombus on the car. The four corners of the rhomb should stand for the four drivers of Alfa Romeo. In the next season one of the drivers tested the new racing car whereupon the shamrock was missing. Within this training session Ugo Sivocci the driver crashed deadly. Out of respect and to set a sign that Sivocci is irreplaceable his three teammates changed the rhomb to a triangle. Until today the sign adorns every sports-car of Alfa Romeo and the Quadrifoglio Versions of the cars.

Passion in every fiber of the bodywork 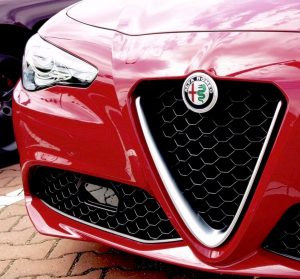 Especially the little weight you notice very much when driving. The Giulia is way more fleet-footed than the Mercedes and drives more nippy. The rear-wheel drive makes so much fun and the rear breaks sometimes by appropriate driving. But the Giulia Quadrifoglio delivers anyway. Some people certainly do not like the fact that the assistance systems can’t be turned off completely even if You put the car in race. However our team wasn’t disappointed by that because we felt more safely while driving and the car was very easy to handle, you could drift any moment you like and doesn’t have to fear loosing the car. An advantage with that is that the light-headedness of young drivers are kept in check. In any road situation, you realize that Alfa has developed the car with Ferrari, the Giulia is definitely a real sports car. Some even rumor that the V6 is just a short V8 of the Ferrari California. But where we are only full of praise, we must also address a negative point. The infotainment system is not on the same level as the systems of the competitors from Germany, this requires urgent improvement.

The Giulia combines the passion of the Italian manufacturer with power in every situation and a high finsih. One can confidently call the Giulia an absolute driving machine that would be fun for everyone. Thus, she is definitely a serious competitor for the Germans from Affalterbach, Ingolstadt and Munich. If you want a car that stands out and which one does not see so often on German roads is served well with the Alfa Romeo Giulia Quadrifoglio, who is in no way inferior to its competitors from Germany!

The author behind the articles on DRIVAR® is founder and managing director, Phillipp. He possesses years of industry experience, has founded the Germany-wide sports car rental company Motion Drive® in 2009, and is the creative mind behind the car-sharing marketplace DRIVAR® from 2017. Phillipp has been actively involved in motorsport since he was a child and is also a sports car enthusiast in his private life.
Sports Cars Luxury Cars Classic Cars